Up and Running – Finally!

First up I have to apologise for the stilted start to my blogging.  I know I logged my first post last November and promised there would be lots more shortly and that’s where it stopped.  I’m not quite sure what happened, something to do with Christmas and the ensuing holidays I suppose.  But they’re all been and gone now, can you believe we are already into February.

So after having been subtly (not) prompted yet again by my beautiful friend Kerri to “get my butt into gear” I have finally committed fingers to keys and here we are.   It’s not actually as hard as I thought it was going to be.  I kept finding all these reasons not to get started, you know – no time, no good photos of cards to post, waiting to get my Sale-a-bration stamps so that I had some current stuff.  But they weren’t really reasons they were just excuses.  So now I’ve started and “hopefully” will continue to post on a regular basis.

I think I’ve worked the uploading photos gig but bear with me if it all falls in a heap.  After reviewing and editing some photos I think I’ve decided that I need a new digital camera, they all seem to be so blurry.  Maybe it’s got something to do with the user, do you think?

Anyway here is a card I made last week for my son’s best friend’s 7th birthday.  I used the balloons from the Sale-a-bration Birthday Whimsy set and lots of Dazzling Diamonds on the chipboard 7, which I inked first using a Bashful Blue ink pad.  The card-stock is Certainly Celery and matched perfectly with some scraps of Basic Grey paper I had hanging around.

My effort was rewarded by a “that’s so cool mum” from my son and the birthday boy liked it as well (probably the most important thing). 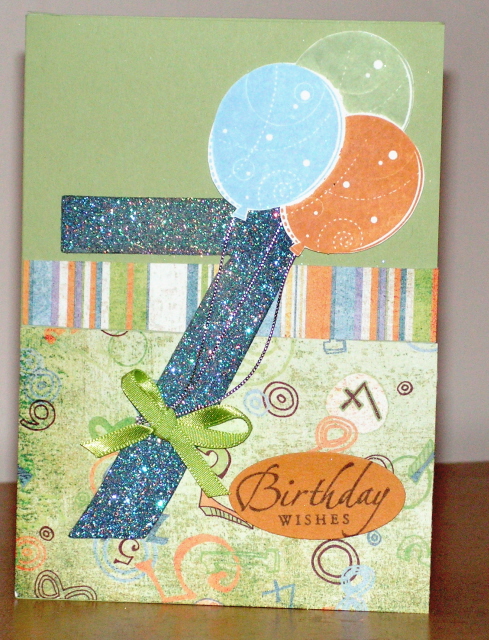